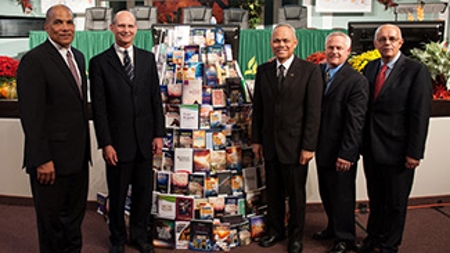 Jack Henderson is what folks used to call a “real ball of fire.” He’s retired now, but he moves fast and he talks fast. He pulses with enthusiasm for the Adventist message in general and for the book The Great Controversy in particular. In fact, hardly a day goes by when he doesn’t share a dozen copies. Anybody who comes across his path is likely to be greeted with a friendly, “Do you like to read?” They get a book, a quick prayer, and then Jack is on this way.

Jack’s church in Hendersonville, North Carolina, is ground zero for an outreach movement that has gathered so much momentum that it has left some people stunned and surprised.

Several years ago, Jack challenged his church to mail The Great Controversy to homes in their zip code. On the first Sabbath, the members donated $9,000. Soon they had raised $50,000.

Next, Jack sat down with Mark Thomas, a top executive at the Review and Herald Publishing Association and together they worked out a way to get the price down to a buck a book. Jack also made a chapel presentation to the employees at the Review. He outlined his dream of sending The Great Controversy to every home in America. “Some of those people came up to me and donated two or three weeks of salary!” remembers an amazed Jack.

Soon, Jack got a call from General Conference headquarters. The publishing department leaders wanted him to talk about the Great Controversy Project for morning worship. Providence was setting the stage for something big to happen. That morning, a vice president named Ted Wilson took in everything Jack said. Several months later, Wilson was named president of the General Conference.

Wilson wanted the Great Controversy Project to go global. He called in general conference vice president Delbert Baker and asked him to lead the effort. They considered what Ellen White had said:

“I am more anxious to see a wide circulation for this book than for any others I have written; for in The Great Controversy, the last message of warning to the world is given more distinctly than in any of my other books."

Baker recalls that they decided to set a lofty goal of sharing 50 million copies of the book. But it didn’t stop there. “Elder Wilson shared with us at a meeting that his personal prayer goal for the project was 100 million,” says Baker. “We were still trying to wrap our arms around the 50 million number!” Baker says that what happened next was a small miracle. “Hundreds of thousands of Adventists sacrificed to distribute the book to their friends.”

Among them was Pam Seeley, a member of the Madison Campus Church in Tennessee. “I’d been praying that God would show me something I could do for him,” she says. She saw a short piece in the Adventist Review about Jack and the Great Controversy Project. Hmm, she thought. The next day, she turned on 3ABN, and there was Jack again talking about his dream. Pam told a friend about the coincidence. “Girl, that’s the Holy Spirit speaking to you,” said the friend.

Pam began to coordinate mailings to the zip codes around her church. “I have some medical issues, so I can’t do much,” she says, “but I can certainly be the Lord’s secretary.”

She would watch as the small donations came in from church members. When there was enough money for another mailing, she would arrange the details with the Review and Herald. They finished with the city of Madison, then they moved on to Goodlettsville, then Old Hickory. Pam, and a small group of church members who make regular donations to the cause have sent out 38,000 copies in the last three years. When you put together her numbers together with those of other Adventist groups around the world, the total is staggering.

“We had a praise and thanksgiving service at the General Conference in October,” says Baker. “There we reported that a total of 142 million copies have been shared. I have not found a record of any denomination handing out these many books in a two-year period. This has been an extremely blessed project.”

At the thanksgiving service in Silver Spring, Maryland, Marcellos Santos took the stage with his family. He told how The Great Controversy had brought him into the church. “I just want to thank you for this program,” he told an auditorium full of church leaders. “I thank God that I am result of a project like this.”